Free will handmade wines that swim against the flow Animal powered wines that do not like to be over-handled.

An attempt to put a piece of truth inside a bottle.

I have been making wines in San Rafael since 2005. Over the years, what began as a hobby became my main occupation: Animal powered wines that do not like to be over-handled, an attempt to put a piece of truth inside a bottle.

I am fascinated by the idea that before the Second World War, agriculture could be performed without chemicals and so do wine elaboration. Hence, part of my journey is to renounce modern techniques to go back to the old ways of doing things. It is a search that tries to find the most frank path between the soil and the drinker, clearing it up as much as possible of interference. That’s why in Las Payas the wines are made with as minimum interference as possible. My wines have confessed to me that they don’t like being bullied over and this is Las Payas territory, where the wines rule and the winemaker obeys.

Also, I am guided by some sort of transparency: I like telling my drinkers everything I do to my wines, which leaves me no choice but to do what I say I do.

Between the first dubious bottles back in 2005, made in the old shed of the finca, and those I make now, a lot of wine has run under our bridge. Now I invite everyone to uncork and swim against the current.

During the pandemic, I successfully crowdfunded a small (half a hectare) agroecological vineyard on the finca. Thanks to the support of many people, it took just two months to raise all the necessary resources, after which El Colectivo* was born. Las Payas now has its own vineyard, at this point growing Pinot Noir, Cabernet Franc, Ancellota, Corvina and Nero d’Avola. Hopefully, its first bunches will be ready for vinification by 2025.

*Translator´s Note: In Spanish both Colective and Bus

The learning curve for making wine is steep. You get only one shot per year after each harvest to ferment. To correct designs, to experiment, to find new ideas, you have to wait until the following harvest. But from all the wines I made over the years, some ideas stuck and became part of Las Payas: minimal intervention; no wood or additives to flavor the wines; use of native yeasts; sulfur dioxide below 30mg/l total, sulfite-free fermentation; not filtering, stabilization, or clarification.

And a dream: to make wine using just grape must and nothing else.

In 2018, Las Payas became the first artisanal winery in Argentina to export its wines, but not before having to (legally) prove the Argentine government that there was no reason why this could not be done; until then only the mainstream wineries were authorized to do so. Today our wines are spewing throughout Brazil, Denmark, Sweden, Miami, New York, Spain, Germany, Holland and Central America. 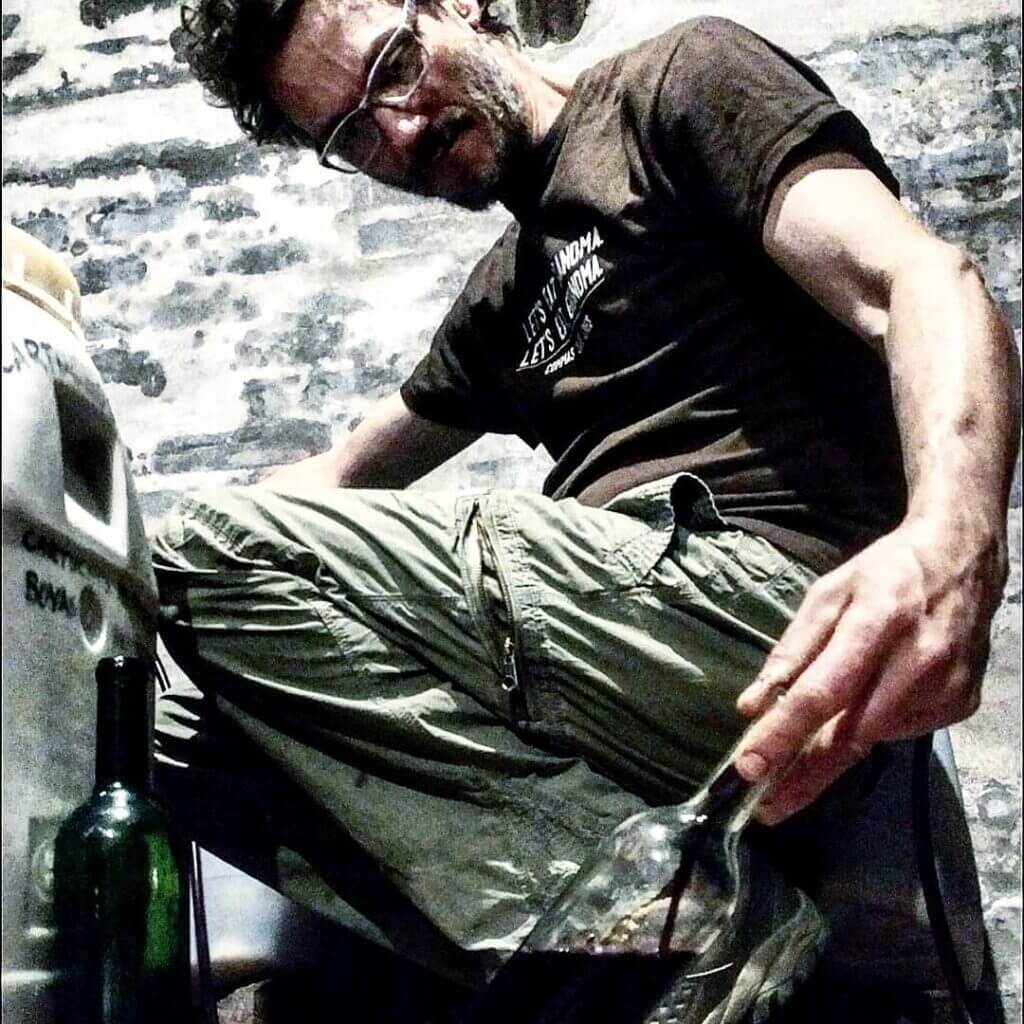 Santiago Salgado is the intellectual and material perpetrator of these bottled illicit acts. From scrubbing the floors of the winery to digressing about the over-ripe aroma of the Bonarda at the wine testing events, he does it all. He is a multifaceted one-man band. From janitor to CEO and everything in between.

Born in Buenos Aires, he received his high school diploma from Colegio Nacional de San Isidro in 1984 and a degree in Communication Science from the University of Buenos Aires in 1989. In 1987 he co-created the pirate FM radio “El Bulo de Merlín” with some friends, which had its headquarters in the back of his mother’s house. Broadcasting became his main occupation for some years. In 1990 he reopened an abandoned neighborhood theater (Stella Maris theatre, which was located at San Isidro, a Buenos Aires Suburb) where he created a Performing Arts School and the children’s theatre Company  The Flywalk Group / The Group Entertainment Co.

The lessons of the Argentine crisis of 2001 together with the overwhelming metaphors of “The Matrix” and “Chicken Run” made him flee Buenos Aires with his family in 2004 in search of a better place to live and raise his daughters. This took them to San Rafael, Mendoza, in an attempt to live off the land, on a farm, at a less frenetic pace than the one imposed by the big city.

In 2005, the combination of his pleasure for manual work and the grape bunches that were ripening at the back of the farm gave birth to the Finca Las Payas project.

For some years now, he has been one course away from getting a technical degree in Enology and Viticulture at the Universidad Nacional de Cuyo, although this will probably never happen.

As anywhere else, the world of wine has its own set of moral rules. They form a great compendium of what is right and what is wrong, which is mostly defined for technical and marketing reasons: “Wines cannot be cloudy”, or “Wine needs to spend time in a...

END_OF_DOCUMENT_TOKEN_TO_BE_REPLACED

Wine is above all food; that is how I fundamentally understand it. In the same way that sugars or refined flours have poorer nutritional quality than their whole-grain counterparts, so do refined wines. That is why I defend the idea of unrefined wines, without...

END_OF_DOCUMENT_TOKEN_TO_BE_REPLACED

In general, I make small batches of unrepeatable wines. When the batch is finished, that wine won’t be made again, along with its name and its label. And in the few cases I do repeat variety, vineyard, and wine design, the name remains and the year of...

END_OF_DOCUMENT_TOKEN_TO_BE_REPLACED

In Las Payas wines are treated with love. I use as little sulfites as possible; sometimes I just correct the acidity, most of the time not even that. Most wines just have a single ingredient: grape. I don’t add preservatives, antioxidants or stabilizers. I rather let...

END_OF_DOCUMENT_TOKEN_TO_BE_REPLACED

Wines are somehow similar to fish: if they go with the current, it means they are probably dead. That is why in Las Payas we want you to uncork and swim against the current. Wines that go with the flow are somehow dead. The rest, even if they seem they are losing the...

END_OF_DOCUMENT_TOKEN_TO_BE_REPLACED

In my search for bottling frank wines that are free to be themselves, I began clearing the equation of the various interfering factors that lay between the vineyard and the glass. In this process, I found barrels to be the ultimate homogenizer, which is why I stopped...